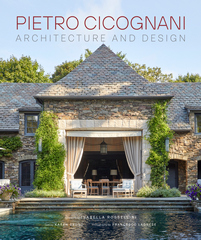 Founded in 1985 by Pietro Cicognani and Ann Kalla (1956-2009), Cicognani Kalla Architect is a full service architectural firm based in New York City whose broad body of work includes private houses, apartments & townhouses, as well as commercial and institutional projects, both domestic and international.

Cicognani Kalla Architect works with many different scales and budgets in both traditional and modern design vocabularies. The firm encourages clients to be part of the process and embraces the unique set of circumstances offered by each project which are discovered through meticulous historical, contextual and technical research. This is achieved by exploring through sketching, model-making (both physical and digital) and testing ideas at full scale. These ideas are then developed in close collaboration with the very best artisans and craftsmen often leading to new techniques and occasionally resurrecting the lost ones. The result is a well built, highly detailed and highly customized design solution that withstands the test of time both physically and stylistically with the success measured by the satisfaction of our clients.

Born in Bologna, Italy, Pietro Cicognani was interested in the built form from a very early age, particularly Etruscan Urbanism and its relationship with the environment. Mr. Cicognani studied at the Ecole des Beaux Arts in Paris, received a Bachelor of Fine Arts from the School of Visual Arts and Master of Architecture from Columbia University. After graduation, he worked for Mitchell/Giurgola Architects in New York on several large scale projects, including the new Parliament House in Australia and eventually relocating to Canberra, Australia to continue working on the project. Upon returning to New York to found Cicognani Kalla Architect, Mr. Cicognani also began teaching in the design studio at Columbia University.